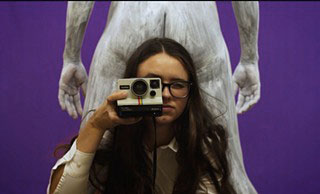 Very excited about our new video by the incredible Vanessa Pla! It was featured in the Austin Chronicle:

When Kristina Boswell penned “Mountains in My Step,” an obvious highlight from her psych outfit Kay Odyssey’s summer LP What’s a Woman to Do, she employed images of western America’s towering landscape to describe the sensual passion she felt for someone – a boulder metaphor (pun intended) rather than the key to one’s heart.

When Austin filmmaker Vanessa Pla first listened to the the track, she heard a strong theme of empowerment – a woman taking huge leaps. At the same time, the band’s name brought to mind the Homeric epic, Greek mythology, and Zeus, whose status in civilized patriarchy can be summed up by the passage the video paraphrases:

“As the sky god, Zeus had easy access to the women of the world and took full advantage of it. Also, his power as a supreme god made him difficult to resist.”

Interpreting that passage resulted in one of the most fascinating music videos out of Austin all year. The clip for “Mountains in My Step” depicts bored schoolgirls touring a museum of women posing nude as Greek statues.

Share:
Austin Chronicle Mountains In My Step Vanessa Pla Whats a woman to do